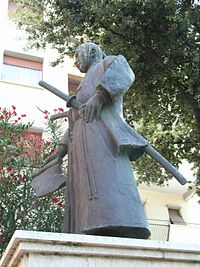 He was born in 1571, almost 450 years ago, in Yamagata.
He was the right arm of the Lord Masamune Date of Sendai.
By the order of Masamune, he had departed to Nueva Espana (Mexico) with his delegation and missionary Luis Sotelo from Uraga Port (Kanagawa) in 1612, but failed due to storm.
As the second trial in 1613, with a Galleon “Sant Juan Bautista” made in Ishinomaki, he had cruised successfully to Acapulco, then crossed Mexico to Veracruz.
His travel continued to Madrid and to Civitavecchia, a port city of Rome.

This is the statue of Tsunenaga in Civitavecchia, baptized Samurai with katana on the waist.

Itinerary of long round trip from Japan to Rome.

Port of Civitavecchia and Fortress Michelangelo.

Replica of Gelleon Sant Juan Bautista displayed at Ishinomaki as the memory of its delagation.

You can visit the Museum San Juan Bautista in Ishinomaki for more detail. Only 1 hour drive from Minami Sanriku.
Sergio.

コメントを残す on Tsunenaga Hasekura, The First Samurai in Rome