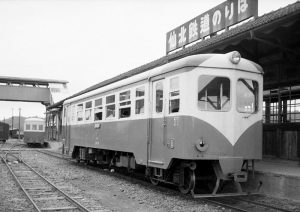 It was running rhythmically in the rice field.

Semine Station, Sempoku railways start from here.
It was convenient to connect to Tokyo Ueno Station from here.

They have tried to operate from Maiya to Shizugawa, but it was not authorized.
Switch Back system at Maiya Station, to go up the hill.

Unfortunately we can not see this train now, but you may watch movie at Tome City History Museum.
Only half an hour drive from Shizugawa.
Sergio